The new network must provide new digital services while preserving the traditional strengths of amateur radio: minimal central planning, but reliance on standards for interoperability; distributed deployment; ability to continue operations when large-scale infrastructure such as electrical power and the Internet fail; and the ability to operate wherever needed.
We are building an interconnected, layered digital network, with each layer optimized to address different bandwidth and propagation challenges. The network incorporates three layers: a 5.8/2.4 GHz mesh network layer based on commercial WISP equipment, providing a backbone of up to 300Mbps, but requiring line-of-site between radio/antenna sites; a very experimental 420 MHz mesh network based on commercial WISP equipment that supports connections on the order of 5Mbps, but that is somewhat more forgiving of terrain and foliage; and a 145/440 MHz packet network that is limited to slower connections, but provides broad coverage.

Fixed sites for this network will be chosen to minimize reliance on exiting amateur radio repeater sites, many of which are collocated with public safety communications systems and subject to the same failure modes. Hams are encouraged to deploy privately-owned 5.8/2.4 GHz and 420 MHz mesh nodes to fill in the gaps in the backbone, and to experiment with and become comfortable with the new technology during the great majority of the time when the network is not required for emergency communications.
While we intend to install a number of backbone nodes to provide the broadest coverage possible (constrained by finances and by availability of mounting locations), extensive use will be made of portable units that can be set up and operated quickly and easily at virtually any location where advanced communications capabilities are needed. These portable units will connect to one or more of the backbone networks, achieving the elevation necessary for their antennas through use of tethered balloons and kytoons, unmanned aerial systems (UAS aircraft such as fixed-wing drones), and portable towers. Portable units will typically be deployed at an incident site, a command location, or sites associated with a public service event. 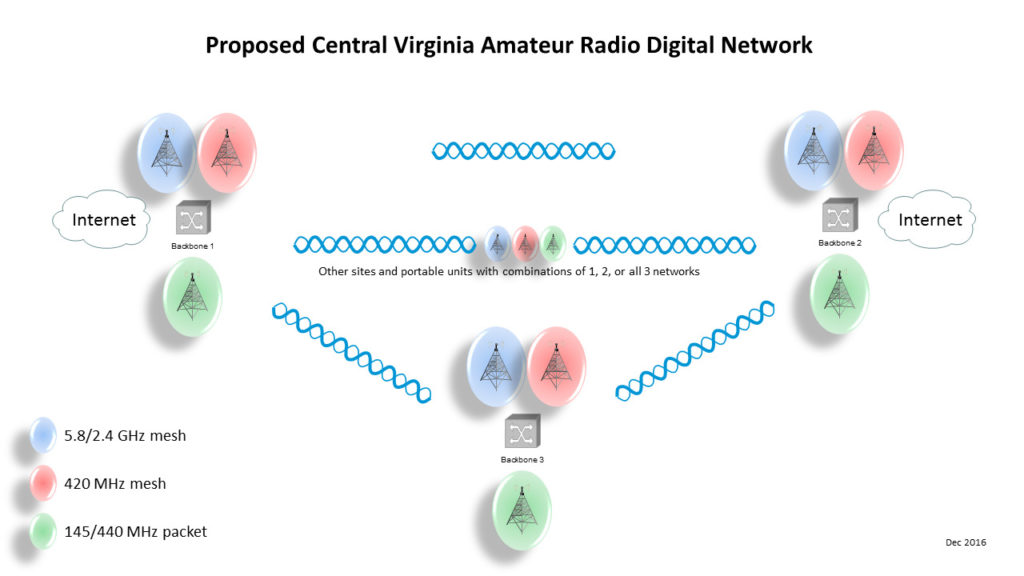 We are building a network that emphasizes flexibility, resilience, and mobile operations. Many of the most significant threats in our communities may occur in areas in which the public safety communications systems (and, by the way, many of our voice repeaters) have dead spots. We will keep these locations in mind as we design and deploy the new digital network.

We are building on the very fine work of our colleagues in Austin , Seattle , and the Pacific Northwest region . These hams have worked to explore the conversion of consumer and Wireless Internet Service Provider (WISP) hardware and software into the service of amateur radio. We will also keep the best of the previous generation of amateur radio digital technology, packet radio and Winlink.

Although initial design and testing is focused on the higher density areas of Charlottesville and Albemarle County, the need for an advanced digital amateur radio network is universal. Hams in surrounding counties have already begun deploying their own networks. All network design is being done with an eye to standards and interoperability. It is our intention that there eventually exist a state-wide (and potentially nationwide) network, through a combination of partnership between adjacent networks and extension of those networks into neighboring areas.

For more information or to volunteer to participate, please contact Mike McPherson, KQ9P, at mike@kq9p.us.